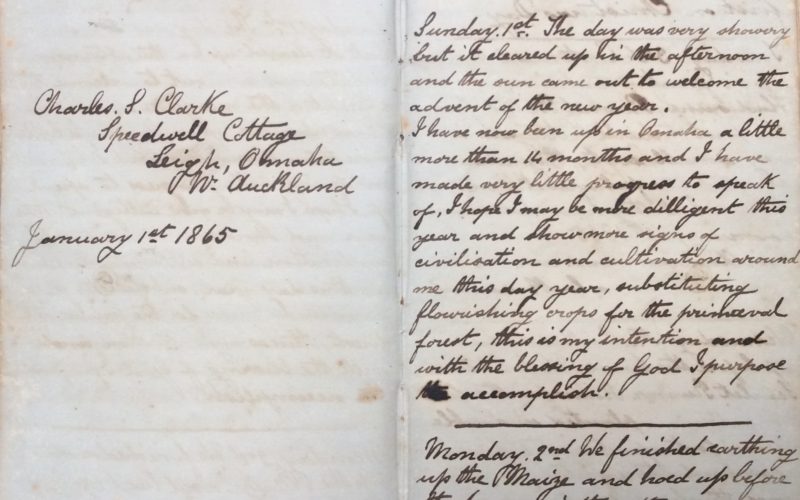 CS Clarke kept a diary that he wrote in nearly every day from the age of 19 until just days before he died at the age of 85.

Mostly his days were pretty ordinary. He did a lot of things that you would expect of someone living on a farm – planting, harvesting, cutting down ti tree. He was a man who told things like they were, and didn’t go into much analysis of events. But when you consider how little we know about most of our ancestors, it’s truly remarkable to be able to read in his own words and his own handwriting what he did on this day 100 years ago.

Frustratingly though, the diaries that would contain the most interesting parts of his life – his immigration to New Zealand (1863-1864), and his marriage and early family live, including the loss of his wife (1867-1888) – are absent.

The diaries start in January 1862 and describe his life as a cadet on a sheep farm in Leicestershire. The entries come to a sudden halt part way through December 1862, then are not picked up again until 1865, 14 months after he first settled in Omaha, New Zealand. They continue through to 1867, then there is a gap of twenty years. When the diaries are next picked up he is middle aged, farming his property in Omaha with his 6 children ranging from 18 year old Maud to 5 year old Willie. The diaries then continue almost uninterrupted until his death in 1929.

He was living with his daughter Jane in Whangateau when he died. After his death the diaries passed through the hands of various family members and ended up in the care of his grand-daughter Agnes Matheson. They were well read and passed around between family members so it’s possible that at this stage some volumes may have been mislaid. In 1996 Alvin Smith (great-grandson of CS Clarke) handed the 29 remaining volumes over to the care of the Warkworth museum. Alvin’s brother Vern subsequently started a project to transcribe the diaries and publish them online (http://cslarke.falkor.gen.nz).

They provide an invaluable source of information about the history of the local area, as well as being of high interest to his descendants.

As an ongoing project, Vern and I are undertaking to identify and link to information about the numerous people mentioned by Clarke in his diaries.