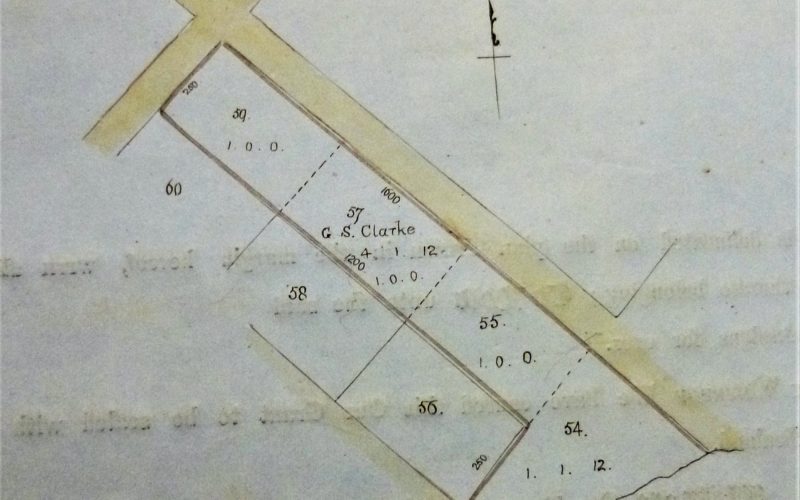 In the words of Charles Septimus Clarke in his notes about the history of Leigh:

“On reading a letter from an Albertland settler to a friend in Leicester I got the idea of coming to NZ so I said good bye to 4 brothers and 5 sisters and embarked on board the ship “Queen of Beauty” (Captain Chapman) on the 5th May 1863. The Wyatt family were my fellow passengers.”

“The “Queen of Beauty” arrived in Auckland harbour on Sunday August 15th. Mr Wyatt and I visited the Land Office and heard that a block of land in the Omaha District was being surveyed into sections and would be open for selection early next year (1864) we took a trip to Omaha and being favourably impressed with the district we decided to wait until the land was available. The price of the sections in Leigh village bad been reduced to 3 per acre – so Mr W and I bought several sections. We could have had the sections that the Hotel and Store now stand on, also Albert Wyatt’s land, but there was not a stick of timber on these, so we chose the sections the other side of the harbour which were covered with bush suitable for building, fencing and firewood. We came to make a start in the latter part of October 1863, the cutter “Flora McDonald” Capt D H McKenzie (Wee Donald) put us and our belongings on the way to Waipu. We camped on the flat where Mr Gregor now owns, Mr W had brought a large marquee from England which we erected on his land on the hill, he then went to Auckland and brought up the family, furniture and goods, it was a job getting all these things up that steep hill especially 4 chests of drawers and heavy boxes.”

“I started to cut down the bush on my section sleeping at night in Mr Wyatt’ s marquee until I had put up a shanty. Later on I built a small house of split slabs, with a small window each side of the door, a large open chimney and 2 bunks at one end. I made a garden, grew maize, pumpkins and all kinds of vegetables. “

CS Clarke was only a young man when he embarked upon his great adventure across the other side of world. In fact The Queen of Beauty arrived in Auckland harbour on his twentieth birthday. Although the recount of his early lifestyle sounds idyllic, in fact it was undoubtedly an incredibly hard time for him. His diary entry on the 1st of January 1865 laments “I have now been up in Omaha a little more than 14 months and I have made very little progress to speak of. I hope I may be more diligent this year and show more signs of civilisation and cultivation around me this day year, substituting flourishing crops for the primeval forest.”

The property Clarke and Wyatt has chosen to purchase had been subdivided into 1 acre blocks with a series of neatly spaced roads planned between them – an indication that these were intended to form part of the village of Leigh. However the terrain was rougher and more inhospitable than the planners realised and the proposed road to link the area to Leigh Village was never built. The men had set themselves an almost impossible task clearing the bush and creating productive land. Eventually Clarke all but abandoned this land and purchased an established farm on the village side of the harbour.