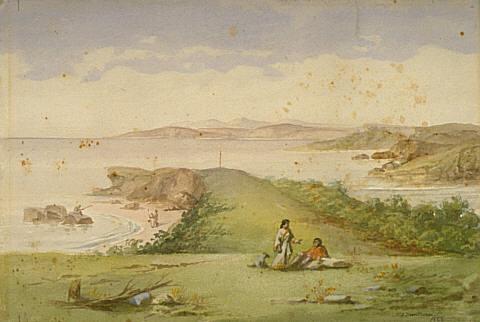 “The early settlers had a very hard time as there was no regular trader, here no store, no school and no Post Office. Our first Post Office was at Mr Dyer’s at Pakiri 7 miles distant, Andersons, Kirk-brides, Wyatts and I took it in turns to go for the mail once a week, Mr Dyer was very hospitable when one of us arrived, he told the cook to get us a cup of tea and a snack which was very acceptable after that walk. After a few years a Post office was opened at Mr W. Greenwoods house on the hill, eventually it was closed and a P.O. was opened in Mr Miller’s store at Leigh.

Flour in those early days was very dear, 32/6 per 100 lb bag so several of the settlers commenced to grow wheat. After the bush was burned off and logged up, the ground was broken up with strong hoes and wheat sown on the surface and chipped in, being new ground good crops were obtained it was cut with a reap hook, winnowed in the wind, and ground into flour in a steel mill turned by hand and rubbed through a sieve before a loaf could be made, the broad was very wholesome but like the bread made from silk dressed flour, Mr Wyatt being of an ingenious nature made a windmill to turn the steel mill, the mill house was mounted on 4 wooden wheels running on a smooth circular track, so that the sails could be turned to face the wind. This was an object of interest as many young people came to gaze at it with wonder not having seen anything like it before.

Pigeons were very plentiful in those early days as a lot of the bush was then standing, they were feeding on the tawa and trairie berries, and it was no uncommon thing for a person to go out shoot 20 in a morning, they were very plump and fat, and the fat had often to do for butter on our bread. Mr Wyatt had a large seine fishing net which was put across the creek at high water and large quantities of small fish were caught, so that the neighbours were told to come and help themselves. The Natives brought round fish for sale, 4 large snapper for 1/- While on the subject of fish I will relate an incident, Mr Wyatt, his son Joe and I were on a boat fishing at the Maori Point, the old Maori chief Kiri came in a boat to us in a great rage saying “you no fish here, from here to Takatu Point is the Maori fishing ground this was reserved to them by the Treaty of Waitangi”. Very good you fish the other side of Point Rodney. This law was in operation for some time but after Kiri’ s death we fished anywhere. When Tenetohi and Rahui were first married they lived in a small weather-boarded house on the flat where Mr Duncan Matheson now lives, their first child (a boy) died so the house and contents were to tapu, the contents were brought out and burned, or broken up, and the house deserted, the occupiers going up to live at the Pa early in 1864 with Kiri and his wife. Their second child Rebecca was born at the Pa early in 1864 and was brought to show Mrs Wyatt who dressed it in long clothes English fashion. In 1864 this tapu house was bought by Messrs McQuarrie and McInnes and was floated round on launch ways and erected on the flat where they were building a vessel (The Banshee)

When we came to Omaha in 1863 (it was called little Omaha at that time) now called Leigh, there lived at the Pa Kiri and his wife, Tenetohi and Rahui, Miriam and several hangers on. On rising ground where some willow trees now grow there lived 3 brothers and their wives namely Tiki, Hawa and Victoria where they had some cultivations, Hawa was drowned by the upsetting of a boat, Tiki went out of his mind and got burned to death in his Whare and Victoria left. The Pa at that time from the point right up to Kiri’s whare was under cultivation, growing maize, potatoes, kumeras, pumpkins, melons, gourds for making calabashes, and peach trees, the women folk doing a good share of the work.”

From notes on the History of Leigh by Charles Septimus Clarke.